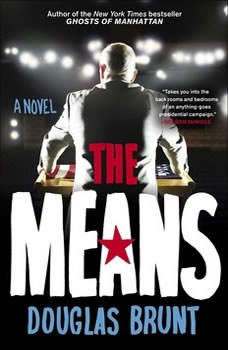 Part Primary Colors, part House of Cards, The Means takes you deep into high-stakes politics where everyone has something to hide.Tom Pauley is a conservative trial attorney in Durham, NC, who is tapped by GOP leaders to campaign for the Governor's mansion. His bold style makes him a favorite for a run at the White House. Mitchell Mason is the president-elect of the United States, pushed into politics by a father determined to create a political dynasty. Mason manages the White House with a personal touch that makes both friends and enemies. Samantha Davis is a child actor-turned-lawyer-turned-journalist, working her way up from the bottom in a competitive industry. She is determined and brilliant, and her dogged pursuit of a decade-old story could trigger a scandal that would upend the political landscape. New York Times bestselling author Douglas Brunt's "savage" (Publishers Weekly) prose creates an incisive portrait of ambition, power, and what it takes to win in the ruthless world of politics today.