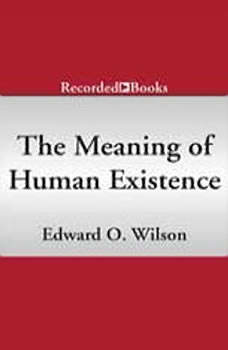 The Meaning of Human Existence

Searching for meaning in what Nietzsche once called “the rainbow colors” around the outer edges of knowledge and imagination, Edward O. Wilson bridges science and philosophy to create a twenty-first-century treatise on human existence. Once criticized for his over-reliance on genetics, Wilson unfurls here his most expansive and advanced theories on human behavior, recognizing that, even though the human and spider evolved similarly, the poet’s sonnet is wholly different than the spider’s web. Whether attempting to explicate “the Riddle of the Human Species,” warning of “the Collapse of Biodiversity,” or even creating a plausible “Portrait of E.T.,” Wilson does indeed believe that humanity holds a special position in the known universe. Alarmed, however, that we are about to abandon natural selection by redesigning biology and human nature as we wish them, Wilson concludes that advances in science and technology bring us our greatest moral dilemma since God stayed the hand of Abraham. Edward O. Wilson is widely recognized as one of the world’s leading scientists. He is the winner of the Pulitzer Prize and the author of the best-selling THE SOCIAL CONQUEST OF EARTH and LETTERS TO A YOUNG SCIENTIST.