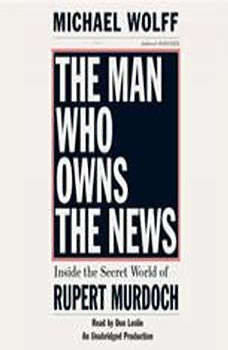 The Man Who Owns the News: Inside the Secret World of Rupert Murdoch

If Rupert Murdoch isn’t making headlines, he’s busy buying the media outlets that generate the headlines. His News Corp. holdings—from the New York Post, Fox News, and most recently The Wall Street Journal, to name just a few—are vast, and his power is unrivaled. So what makes a man like this tick? Michael Wolff gives us the definitive answer in The Man Who Owns the News.

With unprecedented access to Rupert Murdoch himself, and his associates and family, Wolff chronicles the astonishing growth of Murdoch's $70 billion media kingdom. In intimate detail, he probes the Murdoch family dynasty, from the battles that have threatened to destroy it to the reconciliations that seem to only make it stronger. Drawing upon hundreds of hours of interviews, he offers accounts of the Dow Jones takeover as well as plays for Yahoo! and Newsday as they’ve never been revealed before.

Written in the irresistible stye that only an award-winning columnist for Vanity Fair can deliver, The Man Who Owns the News offers an exclusive glimpse into a man who wields extraordinary power and influence in the media on a worldwide scale—and whose family is being groomed to carry his legacy into the future.