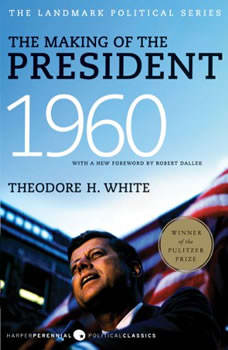 The Making of the President 1960

A Harper Perennial Political Classic, The Making of the President 1960 is the groundbreaking national bestseller and Pulitzer Prize-winning account of the 1960 presidential campaign and the election of John F. Kennedy.

The Making of the President: 1960 revolutionized the way modern presidential campaigns are reported. Reporting from within the campaign for the first time on record, White’s extensive research and access to all parties involved set the bar for campaign coverage and remains unparalleled. White conveyed, in magnificent detail and with exquisite pacing, the high-stakes drama; he painted the unforgettable, even mythic, story of JFK versus Nixon; and most of all, he imbued the nation’s presidential election process with a grandeur that later political writers have rarely matched.

The Enemy of the People
by Jim Acosta

From CNN’s veteran Chief White House Correspondent Jim Acosta, an explosive, first-hand account of the dangers he faces reporting on the current White House while fighting on the front lines in President Trump’s war on truth.In Mr. Trump...

The Russia Hoax
by Gregg Jarrett

Fox News legal analyst Gregg Jarrett reveals the real story behind Hillary Clinton’s deep state collaborators in government and exposes their nefarious actions during and after the 2016 election.The Russia Hoax reveals how persons within...

NEW YORK TIMES BESTSELLER • Dispatches from the 2016 election that provide an eerily prescient take on our democracy’s uncertain future, by the country’s most perceptive and fearless political journalist. In twenty-five pieces from ...

#1 NEW YORK TIMES BESTSELLER The incredible, harrowing account of how American democracy was hacked by Moscow as part of a covert operation to influence the U.S. election and help Donald Trump gain the presidency. RUSSIAN ROULETTE is a story of ...

From the host of MSNBC’s The Last Word with Lawrence O'Donnell, an important and enthralling new account of the presidential election that changed everything, the race that created American politics as we know it todayThe 1968 U.S. Presidentia...

Why is America living in an age of profound economic inequality? Why, despite the desperate need to address climate change, have even modest environmental efforts been defeated again and again? Why have protections for employees been decimated? Why ...