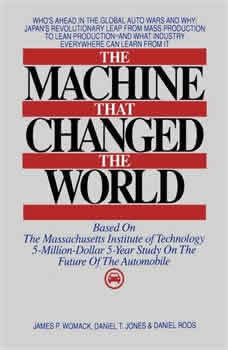 The Machine That Changed the World: The Story of Lean Production-- Toyota's Secret Weapon in the Global Car Wars That Is Now Revolutionizing World Industry

Today, the industrial world is experiencing the most revolutionary change since Henry Ford's assembly line -- which forever changed the way things are made. Japanese companies are sweeping the world, as Western companies and governments struggle to find ways to emulate them. The Machine That Changed the World points for the first time to a positive way out of this dilemma. It shows that being defeatist about the Japanese threat, and tougher protectionism, are not the answers. This book outlines the enormous tasks facing Western companies in the 1990s and has cogent messages for Japanese firms as well, as they move abroad. The Machine That Changed the World is based on the largest and most thorough study ever undertaken in any industry: the Massachusetts Institute of Technology five-million-dollar, five-year, fourteen-country International Motor Vehicle Program's study of the worldwide auto industry. Twice in this century the auto industry has changed our most fundamental ideas about how to make things. Now it is doing it again. Just as mass production swept away craft production, so a new way of making things, called lean production, is now rapidly making mass production obsolete. Lean production is the Japanese secret weapon in the industrial wars and is spreading throughout the world. If Western companies and their managers and workers are to survive in the 1990s, they must learn and adapt to lean production. Some of the smartest already have begun to do so. Lean production welds the activities of everyone from top management to line workers, to suppliers, into a tightly integrated whole that can respond almost instantly to marketing demands from consumers. It can also double production and quality, while keeping costs down. Its adoption, as it inevitably spreads beyond the auto industry, will change almost every industry and consequently how we work, how we live, and the fate of companies and nations as they respond to its impact. In clear and compelling terms, this book explains what lean production is, and its global implications for all of us.

The Future Is Faster Than You Think
by Peter H. Diamandis