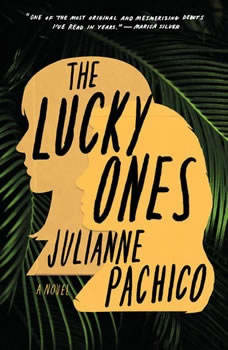 A literary jigsaw puzzle of a debut novel set in Colombia during the peak of its decades-long conflict, and in New York City

While her parents are away, a teenager finds herself home alone, with the household staff mysteriously gone, no phone connection, and news of an insurgency on the radio—and then she hears a knock at the door. Her teacher, who has been kidnapped by guerrillas, recites Shakespeare in the jungle to a class of sticks, leaves, and stones while his captors watch his every move. Another classmate, who has fled Colombia for the clubs of New York, is unable to forget the life she left behind without the help of the little bags of powder she carries with her. Taking place over two decades, The Lucky Ones presents us with a world in which perpetrators are indistinguishable from saviors, the truth is elusive, and loved ones can disappear without a trace.

A prismatic tale of a group of characters who emerge and recede throughout the novel and touch one another’s lives in ways even they cannot comprehend, The Lucky Ones captures the intensity of life in Colombia as paramilitaries, guerrillas, and drug traffickers tear the country apart. Combining vivid descriptions of life under siege with a hallucinatory feel that befits its violent world, The Lucky Ones introduces a truly original and exciting new voice in fiction.

Praise for The Lucky Ones

“A blunt, fresh and unsentimental look inside Colombia’s last thirty bloody years . . . an enjoyable and freaky joy ride. . . . [Julianne] Pachico conveys the fear that Colombian children grow up with—she made that pit in my stomach open up again. . . . At the end you’ll come out of this ride with a better understanding of Colombia’s surreal state of affairs.”—Silvana Paternostro, The New York Times Book Review

“An expansive tapestry of a debut.”—Elle

“Thrilling . . . The Lucky Ones is no ordinary coming-of-age novel. Julianne Pachico’s remarkably inventive debut navigates what it means to grow up wealthy amid the reality of conflict in Colombia.”—The Atlantic

"Nothing is conventionally cohesive in The Lucky Ones, with its looping sense of time and fractured narrative structure. But there is an enduring sense of an ungovernable world unraveling, even as the disparate strands of this deeply affecting novel finally converge.”—Paste

“In finely calibrated prose, this stirring novel plumbs the fates of those who struggled against the Colombian political upheaval that began in the ‘90s.”—O Magazine

“Riveting . . . Having lived in Colombia until she turned eighteen, Pachico has a firsthand connection to the country’s charms and troubles that shines through on every gripping page.”—Publishers Weekly (starred review)

“Julianne Pachico’s tough and stunning novel set in both the Colombian and New York drug jungles kept this reader up all night and made her double-check that her front door was locked tight.”—Lily Tuck, National Book Award–winning author of The News from Paraguay and The Double Life of Liliane

All the Names They Used for God
by Anjali Sachdeva

The City We Became
by N. K. Jemisin

Before the Coffee Gets Cold
by Toshikazu Kawaguchi

A House at the Bottom of a Lake
by Josh Malerman

Colorless Tsukuru Tazaki and His Year...
by Haruki Murakami