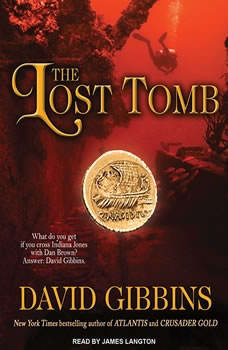 In the treacherous waters off the rugged Sicilian coast, marine archaeologist Jack Howard and his team of scientific experts and ex-Special Forces commandos make a shocking find while searching for the legendary shipwreck of the apostle Paul. And when a second artifact is uncovered in the ruins of a buried city, Jack is on the verge of a discovery that could shake the world to its foundations: the handwritten words of Jesus Christ himself. As he follows a hunch from the dying confession of an emperor to the burial crypt of a medieval pagan queen, Jack is chasing a conspiracy whose web stretches to the highest levels of international power—and he will have to risk everything to stop the controversial document from falling into the hands of a shadowy brotherhood determined to fulfill their murderous vows.

The Bear and the Dragon
by Tom Clancy

Newly elected, Jack Ryan has found that being President is not easy: domestic pitfalls await him at every turn; there's a revolution in Liberia; the Asian economy is going down the tubes; and now, in Moscow, someone may have tried to assassinate the...

The Storm
by Clive Cussler

The thrilling new novel in the New York Times bestselling Kurt Austin Adventures… In the middle of the Indian Ocean, a NUMA research vessel is taking water samples when a crew member spots a patch of black oil ahead of them. But the substance ...

The Thief
by Clive Cussler

On the ocean liner Mauretania, two European scientists with a dramatic new invention are barely rescued from abduction by the Van Dorn Detective Agency's intrepid chief investigator, Isaac Bell. Unfortunately, they are not so lucky the second time. ...

The Secret of Excalibur
by Andy McDermott

A LEGENDARY WEAPON. A RUTHLESS ASSASSIN. A PERILOUS HUNT. Excalibur. Legend has it that he who carries King Arthur's mighty sword into battle will be invincible. But for more than a thousand years, the secret to the whereabouts of this powerful ...

The Tomb of Hercules
by Andy McDermott

AN ANCIENT WARRIOR. AN INCREDIBLE TREASURE. A LETHAL ENEMY. It's the opportunity of a lifetime—the chance to prove that a tomb containing the remains of the legendary hero Hercules actually exists. If American archaeologist Nina Wilde can l...

“Dirk Pitt is oceanography’s answer to Indiana Jones,” praises the Associated Press. “Exotic locations, ruthless villains and many narrow escapes—Cussler’s fans come for swashbuckling [and] he delivers.” And...

For five novels, Clive Cussler has brought readers into the world of the Oregon, a seemingly dilapidated ship packed with sophisticated equipment, and captained by the rakish, one-legged Juan Cabrillo. And now the Oregon and its crew face their bigg...

The dazzling new novel in the #1 New York Times–bestselling series from the grand master of adventure.It is called zero point energy, and it really exists—a state of energy contained in all matter everywhere, and thus all but unlimited. ...

A Novel from the NUMA(r) FilesAbridged read by James NaughtonUnabridged read by Scott Brick The hair-raising new Kurt Austin adventure from the authors of the bestselling Fire Ice. Abridged * Five CDs * 6 hours

I have to say I was very disappointed with this book. Too much historical fact-giving taking over the storyline. I struggled for two weeks to read it and finally had to give it up. Very interesting information and theories, but more for a non-fiction book than an action novel...