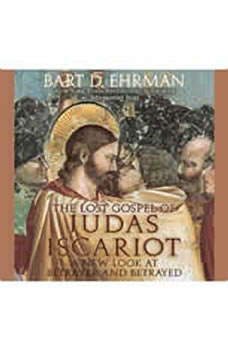 The Lost Gospel of Judas Iscariot: A New Look at Betrayer and Betrayed

The leading authority on this gospel, early church historian Bart Ehrman, offers the first complete account of the discovery and illuminates the significance of this remarkable ancient text.

Beyond Belief
by Elaine Pagels

In Beyond Belief, renowned religion scholar Elaine Pagels continues her groundbreaking examination of the earliest Christian texts, arguing for an ongoing assessment of faith and a questioning of religious orthodoxy. Spurred on by personal tragedy a...

From the New York Times bestselling author of Walking the Bible and Abraham comes a revelatory journey across four continents and 4,000 years exploring how Adam and Eve introduced the idea of love into the world, and how they continue to shape our d...

Beyond Belief
by Elaine Pagels

Special edition including the complete text of the Gospel of ThomasElaine Pagels, one of the world’s most important writers and thinkers on religion and history, and winner of the National Book Award for her groundbreaking work The Gnostic Gos...

Elaine Pagels explores the surprising history of the most controversial book of the Bible.In the waning days of the Roman Empire, militant Jews in Jerusalem had waged anall-out war against Rome’s occupation of Judea, and their defeat resulted ...

What sort of "person" is God? Is it possible to approach him not as an object of religious reverence, but as the protagonist of the world's greatest book--as a character who possesses all the depths, contradictions, and abiguities of a Hamlet? In th...

Author Jennifer Rothschild has a story for you. It's about an unlikely couple, an unusual courtship, a beautiful wedding, and an illicit affair. Despite this situation, the marriage did not fail. It flourished. Here is the story of Hosea's l...

The problems with the Bible that New Testament scholar Bart Ehrman discussed in his bestseller Misquoting Jesus—and on The Daily Show with John Stewart, NPR, and Dateline NBC, among others—are expanded upon exponentially in his latest b...

End Times and the Secret of the Mahdi
by Michael Youssef

Striking parallels exist between the “Beast” of Revelation (the Antichrist) and the prophetic figure in Islam known as the Mahdi. Muslims view the Mahdi as a great savior who will lead a revolution and establish a global Islami...

The Bible reveals glorious things. And yet we often miss its power because we read it the same way we read any other book. In Reading the Bible Supernaturally, best-selling author John Piper teaches us how to read the Bible in light of its divi...