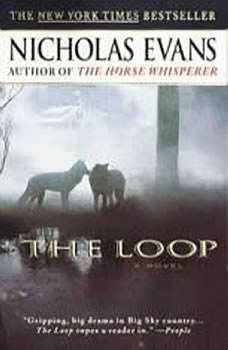 A pack of wolves makes a sudden savage return to the Rocky Mountain ranching town of Hope, Montana, where a century earlier they were slaughtered by the thousands. Now shielded by law as an endangered species, they reawaken an ancient hatred that will tear a family, and ultimately the town, apart.

At the center of the storm is Helen Ross, a twenty-nine-year-old wolf biologist sent alone into this remote and hostile place to protect the wolves from those who seek to destroy them. The Loop charts her struggle, and her dangerous love affair with the son of her most powerful opponent, the brutal and charismatic rancher Buck Calder.

A haunting exploration of man's conflict with nature and the wild within himself, an epic story of deadly passions and redemptive love set against the grandeur of the American West, The Loop is destined to capture the hearts and imaginations of readers everywhere.

About Face
by Fern Michaels

When Dr. Blake Hunter discovers Casey Edwards wandering along a Sweetwater, Georgia, road, she’s a woman without a past, her memory stripped of the terrifying events that shattered her innocence a decade ago. The scrap of paper she clutches in...

The Rescue
by Nicholas Sparks

Taylor McAden is a volunteer fireman who is always the first to plunge into danger. But there is one risk he can't bring himself to take: falling in love. Then he meets Denise Holden, a single mother who has moved to the small town of Edenton, North...

From the #1 New York Times bestselling author of The Da Vinci Code, Angels & Demons, and Inferno—now a major film directed by Ron Howard and starring Tom Hanks and Felicity Jones—comes a lightning-fast thriller about an astonishing NASA ...

One Door Away From Heaven
by Dean Koontz

#1 NEW YORK TIMES BESTSELLER Michelina Bellsong is on a mission. She is following a missing family to the edge of America . . . to a place she never knew existed—a place of terror, wonder, and shattering revelation. What awaits ...

Light on Snow
by Anita Shreve

What makes a family? That's what twelve-year-old Nicky Dillon wonders after she and her widowed father discover a wailing, abandoned baby in the snow-filled woods near their New Hampshire home. Through the days that follow, the Dillons face a thicke...

In this riveting novel of almost unbearable suspense, three fragile yet determined people become dangerously entangled in a relentlessly escalating crisis. Colonel Behrani, once a wealthy man in Iran, is now a struggling immigrant willing to bet e...