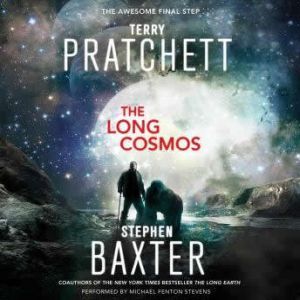 The thrilling conclusion to the internationally bestselling Long Earth series explores the greatest question of all: What is the meaning of life?2070-71. Nearly six decades after Step Day, a new society continues to evolve in the Long Earth. Now, a message has been received: “Join us.”The Next—the hyper-intelligent post-humans—realize that the missive contains instructions for kick-starting the development of an immense artificial intelligence known as The Machine. But to build this computer the size of an Earth continent, they must obtain help from the more populous and still industrious worlds of mankind.Meanwhile, on a trek in the High Meggers, Joshua Valienté, now nearing seventy, is saved from death when a troll band discovers him. Living among the trolls as he recovers, Joshua develops a deeper understanding of this collective-intelligence species and its society. He discovers that some older trolls, with capacious memories, act as communal libraries, and live on a very strange Long Earth world, in caverns under the root systems of trees as tall as mountains.Valienté also learns something much more profound . . . about life and its purpose in the Long Earth: We cultivate the cosmos to maximize the opportunities for life and joy in this universe, and to prepare for new universes to come.