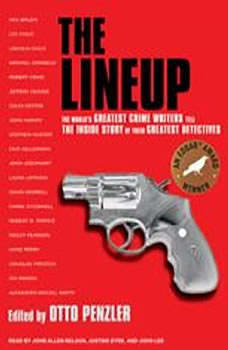 The Lineup: The World's Greatest Crime Writers Tell the Inside Story of Their Greatest Detectives

A great recurring character in a series you love becomes an old friend. You learn about their strange quirks and their haunted pasts and root for them every time they face danger. But where do some of the most fascinating sleuths in the mystery and thriller world really come from? What was the real-life location that inspired Michael Connelly to make Harry Bosch a Vietnam vet tunnel rat? Why is Lee Child's Jack Reacher a drifter? How did a brief encounter in Botswana inspire Alexander McCall Smith to create Precious Ramotswe? In The Lineup, some of the top mystery writers in the world tell about the genesis of their most beloved characters—or, in some cases, let their creations do the talking. The following characters (and their creators) are featured in this collection: Jack Taylor by Ken Bruen Jack Reacher by Lee Child Hieronymus Bosch by Michael Connelly Charlie Parker by John Connolly Elvis Cole and Joe Pike by Robert Crais Lincoln Rhyme by Jeffery Deaver Inspector Morse by Colin Dexter Charlie Resnick by John Harvey Bob Lee Swagger by Stephen Hunter Peter Decker and Rina Lazarus by Faye Kellerman Alex Delaware by Jonathan Kellerman Dismas Hardy by John Lescroart Tess Monaghan by Laura Lippman Rambo by David Morrell Mallory by Carol O'Connell Spenser by Robert B. Parker Lou Boldt by Ridley Pearson Charlotte and Thomas Pitt by Anne Perry Aloysius X. L. Pendergast by Douglas Preston and Lincoln Child John Rebus by Ian Rankin Precious Ramotswe by Alexander McCall Smith