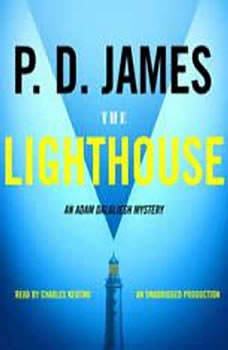 The Lighthouse: An Adam Dalgliesh Mystery

A subtle and powerful work of contemporary fiction.

Combe Island off the Cornish coast has a bloodstained history of piracy and cruelty but now, privately owned, it offers respite to over-stressed men and women in positions of high authority who require privacy and guaranteed security. But the peace of Combe is violated when one of the distinguished visitors is bizarrely murdered.

Commander Adam Dalgliesh is called in to solve the mystery quickly and discreetly, but at a difficult time for him and his depleted team. Dalgliesh is uncertain about his future with Emma Lavenham, the woman he loves; Detective Inspector Kate Miskin has her own emotional problems; and the ambitious Sergeant Francis Benton-Smith is worried about working under Kate. Hardly has the team begun to unravel the complicated motives of the suspects than there is a second brutal killing, and the whole investigation is jeopardized when Dalgliesh is faced with a danger more insidious and as potentially fatal as murder.

This eagerly awaited successor to the international bestseller The Murder Room displays all the qualities that lovers of P. D. James’s novels the world over have come to expect: sensitive characterization, an exciting and superbly structured plot and vivid evocation of place.

The Devil's Feather
by Minette Walters

In each of her ten critically acclaimed and hugely popular novels, Minette Walters has explored the dark terrain of the human psyche to give us thrillers of exceptional psychological complexity and suspense. Now, in The Devil's Feather, she gives us...

Dreaming of the Bones
by Deborah Crombie

Not in the Flesh
by Ruth Rendell

A new Chief Inspector Wexford mystery from the author who Time magazine has called “the best mystery writer in the English-speaking world.” When the truffle-hunting dog starts to dig furiously, his master’s first reaction is deligh...

National Bestseller. Featuring the famous Commander Adam Dalgliesh, Devices and Desires is a thrilling and insightfully crafted novel of fallible people caught in a net of secrets, ambitions, and schemes on a lonely stretch of Norfolk coast...

4:50 From Paddington
by Agatha Christie

In Agatha Christie’s classic mystery 4:50 From Paddington, a woman in one train witnesses a murder occurring in another passing one…and only Miss Marple believes her story.For an instant the two trains ran side by side. In that frozen m...

One can always count on meeting witty, semi-complicated characters in this series. They feel like people you know with feelings you have had. Great mysteries, have enjoyed everyone.

This book was so slow and boring I only made it as far as the second disc. I suggest that you choose a different book.