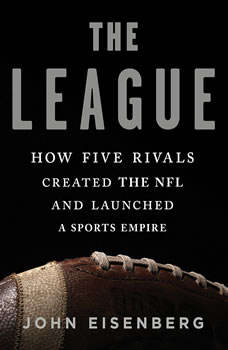 The League: How Five Rivals Created the NFL and Launched a Sports Empire

The epic tale of the five owners who shepherded the NFL through its tumultuous early decades and built the most popular sport in America The National Football League is a towering, distinctly American colossus spewing out $13 billion in annual revenue. Yet its current dominance has obscured how professional football got its start. In The League, John Eisenberg reveals that Art Rooney, George Halas, Tim Mara, George Preston Marshall, and Bert Bell took an immense risk by investing in the professional game. At that time the sport barely registered on the national scene, where college football, baseball, boxing, and horseracing dominated. The five owners succeeded only because at critical junctures in the 1920s, 1930s, and 1940s each sacrificed the short-term success of his team for the longer-term good of the League. At once a history of a sport and a remarkable story of business ingenuity, The League is an essential read for any fan of our true national pastime.

The Secret Game
by Scott Ellsworth

The History of the World Cup – ...
by Brian Glanville

The Road to Sparta
by Dean Karnazes

Those Guys Have All the Fun
by James Andrew Miller