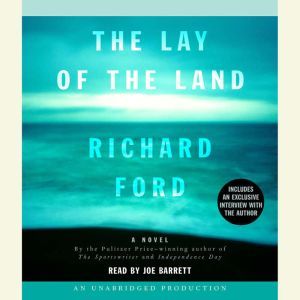 The Lay of the Land

With The Sportswriter, in 1985, Richard Ford began a cycle of novels that ten years later – after Independence Day won both the Pulitzer Prize and the PEN/Faulkner Award – was hailed by The Times of London as “an extraordinary epic [that] is nothing less than the story of the twentieth century itself.”

Frank Bascombe’s story resumes, in the fall of 2000, with the presidential election still hanging in the balance and Thanksgiving looming before him with all the perils of a post-nuclear family get-together. He’s now plying his trade as a realtor on the Jersey shore and contending with health, marital and familial issues that have his full attention: “all the ways that life seems like life at age fifty-five strewn around me like poppies.”

Richard Ford’s first novel in over a decade: the funniest, most engaging (and explosive) book he’s written, and a major literary event.