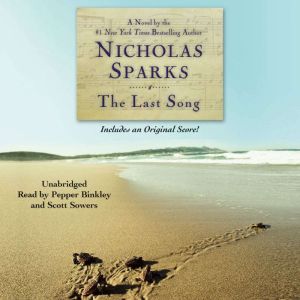 #1 bestselling author Nicholas Sparks's new novel is at once a compelling family drama and a heartrending tale of young love. Seventeen year old Veronica "Ronnie" Miller's life was turned upside-down when her parents divorced and her father moved from New York City to Wilmington, North Carolina. Three years later, she remains angry and alientated from her parents, especially her father...until her mother decides it would be in everyone's best interest if she spent the summer in Wilmington with him. Ronnie's father, a former concert pianist and teacher, is living a quiet life in the beach town, immersed in creating a work of art that will become the centerpiece of a local church. The tale that unfolds is an unforgettable story of love on many levels -- first love, love between parents and children -- that demonstrates, as only a Nicholas Sparks novel can, the many ways that love can break our hearts...and heal them.

the last song was beautiful in many ways. of course it was, all nicholas sparks books are. anyways the way ronnie and will connected was a pleasure to read about. i balled when i read the last fifty or so pages as ronnie's father worsened. i knew ronnie would go to julliard though and that somehow will would find a way to be with her. all in all it was the best book i've ever read of nicholas sparks. the way marcus was with blaze really mad me emotional. the book moved me in a way no other book has moved me before. it was intresting reading from different characters. my favorite was will. he was so caring about keeping scotts secret and yet he wasn't mad at ronnie for telling him to report it. they stuck together no matter what happened. no matter what will's mother said they loved each other through and through.