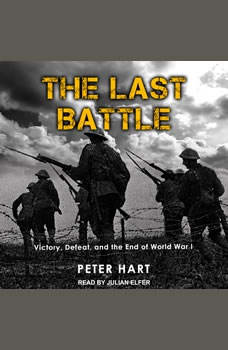 The Last Battle: Victory, Defeat, and the End of World War I

Author of The Great War, as well as celebrated accounts of the battles of the Somme, Passchendaele, Jutland, and Gallipoli, historian Peter Hart now turns to World War One's final months. Much has been made of—and written about—August 1914. There has been comparatively little focus on August 1918 and the lead-up to November. Because of the fixation on the Great War's opening moves, and the great battles that followed over the course of the next four years, the endgame seems to come as a stunning anticlimax. At the eleventh hour of the eleventh day of the eleventh month of 1918 the guns simply fell silent. The Last Battle definitively corrects this misperception. As Hart shows, a number of factors precipitated the Armistice. After four years of bloodshed, Germany was nearly bankrupt and there was a growing rift between the military High Command and political leadership. But it also remained a determined combatant, and France and Great Britain had equally been stretched to their limits; Russia had abandoned the conflict in the late winter of 1918. However complex the causes of Germany's ultimate defeat, Allied success on the Western Front, as Hart reveals, tipped the scales—the triumphs at the Fifth Battle of Ypres, the Sambre, the Selle, and the Meuse-Argonne, where American forces made arguably their greatest contribution. The offensives cracked the Hindenburg Line and wore down the German resistance, precipitating collapse. Final victory came at great human cost and involved the combined efforts of millions of men. Using the testimony of a range of participants, from the Doughboys, Tommies, German infantrymen, and French poilus who did the fighting, to those in command during those last days and weeks, Hart brings intimacy and sweep to the events that led to November 11, 1918.