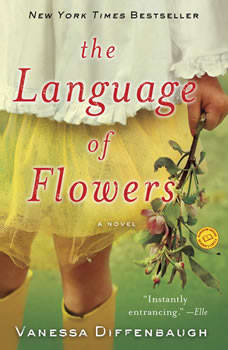 The Language of Flowers

A mesmerizing, moving, and elegantly written debut novel, The Language of Flowers beautifully weaves past and present, creating a vivid portrait of an unforgettable woman whose gift for flowers helps her change the lives of others even as she struggles to overcome her own troubled past.

The Victorian language of flowers was used to convey romantic expressions: honeysuckle for devotion, asters for patience, and red roses for love. But for Victoria Jones, it’s been more useful in communicating grief, mistrust, and solitude. After a childhood spent in the foster-care system, she is unable to get close to anybody, and her only connection to the world is through flowers and their meanings.

Now eighteen and emancipated from the system, Victoria has nowhere to go and sleeps in a public park, where she plants a small garden of her own. Soon a local florist discovers her talents, and Victoria realizes she has a gift for helping others through the flowers she chooses for them. But a mysterious vendor at the flower market has her questioning what’s been missing in her life, and when she’s forced to confront a painful secret from her past, she must decide whether it’s worth risking everything for a second chance at happiness.

Praise for The Language of Flowers

"Instantly enchanting . . . [Diffenbaugh] is the best new writer of the year."—Elle

“I would like to hand Vanessa Diffenbaugh a bouquet of bouvardia (enthusiasm), gladiolus (you pierce my heart) and lisianthus (appreciation).  In this original and brilliant first novel, Diffenbaugh has united her fascination with the language of flowers—a long-forgotten and mysterious way of communication—with her firsthand knowledge of the travails of the foster-care system. . . . This novel is both enchanting and cruel, full of beauty and anger. Diffenbaugh is a talented writer and a mesmerizing storyteller.  She includes a flower dictionary in case we want to use the language ourselves.  And there is one more sprig I should add to her bouquet: a single pink carnation (I will never forget you).”—Washington Post

"A fascinating debut . . . Diffenbaugh clearly knows both the human heart and her plants, and she keeps us rooting for the damaged Victoria."—O Magazine

"Diffenbaugh effortlessly spins this enchanting tale, making even her prickly protagonist impossible not to love."—Entertainment Weekly

V is for Vengeance
by Sue Grafton

A woman with a murky past who kills herself—or was it murder? A spoiled kid awash in gambling debt who thinks he can beat the system. A lovely woman whose life is about to splinter into a thousand fragments. A professional shoplifting ring wor...

When Will There Be Good News?
by Kate Atkinson

The third installment in Kate Atkinson's wildly beloved series of Jackson Brodie Mysteries: a complex tale of murder, coincidence, and connected lives."As a reader, I was charmed. As a novelist, I was staggered by Kate Atkinson's narrative wizardry...

The Other Queen
by Philippa Gregory

Two women competing for a man's heart Two queens fighting to the death for dominance The untold story of Mary Queen of Scots New York Times bestselling author Philippa Gregory presents a new and unique view of one of history's most intriguing, ro...