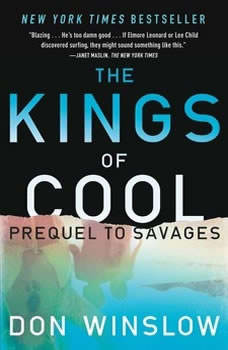 The Kings of Cool: A Prequel to Savages

Published to coincide with the release of Academy Award-winning filmmaker Oliver Stone’s major film of Savages from Universal Pictures in July 2012—starring John Travolta, Blake Lively, Benecio Del Toro, Uma Thurman, Emile Hirsch, Taylor Kitsch, Aaron Johnson, and Salma Hayek—this is the much-anticipated prequel to Don Winslow’s acclaimed New York Times bestseller.In Savages, Don Winslow introduced Ben and Chon, twentysomething best friends who risk everything to save the girl they both love, O. Among the most celebrated literary thrillers in recent memory, Savages was a Top 10 Book of 2010 selection by Janet Maslin in The New York Times and Stephen King in Entertainment Weekly as well as Sarah Weinman in the Los Angeles Times and publications around the world.     Now, in his high-octane prequel, Winslow reaches back in time to tell the story of how Ben, Chon, and O became the people they are. Spanning from 1960s Southern California to the recent past, it is a tale of family in all its forms—fathers and sons, mothers and daughters, friends and lovers. As the younger generation does battle with a cabal of drug dealers and crooked cops, they come to learn that their future is inextricably linked with their parents’ history. A series of breakneck twists and turns puts the two generations on a collision course, culminating in a stunning showdown that will ultimately force Ben, Chon, and O to choose between their real families and their love for each other.