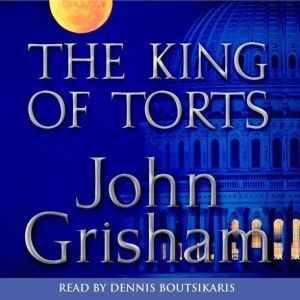 The King of Torts

The office of the public defender is not known as a training ground for bright young litigators. Clay Carter has been there too long and, like most of his colleagues, dreams of a better job in a real firm. When he reluctantly takes the case of a young man charged with a random street killing, he assumes it is just another of the many senseless murders that hit D.C. every week.

As he digs into the background of his client, Clay stumbles on a conspiracy too horrible to believe. He suddenly finds himself in the middle of a complex case against one of the largest pharmaceutical companies in the world, looking at the kind of enormous settlement that would totally change his life—that would make him, almost overnight, the legal profession’s newest king of torts...

Hesitate to commit myself to your audience and I have always admired Mr. Grisham. However, I think ,sadly, that he has sort of found a 'recipe' for a best-seller-- I don't find any sense of 'law commitment' in the latest of his books--just sort of 'where does the plot go from here?' Just look at the writing in 'The Firm' and 'The Client': believable people with believable dialogue. 'King of Torts' is an exercize for the author. ---from an old English teacher