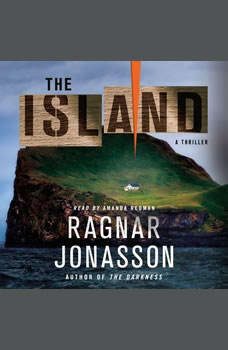 The Island: A Thriller

"Narrator Amanda Redman gives an adept performance as she takes on the various characters in this Icelandic thriller." — AudioFile Magazine The newest superstar on the Icelandic crime fiction scene has arrived with a superb followup to The Darkness. Shortlisted for the Crime Novel of the Year Award in IcelandThird Place, Novel of the Year Award 2016 in Iceland, selected by booksellersOne of the bestselling novels in Iceland in 2016Autumn of 1987 takes a young couple on a romantic trip in the Westfjords holiday—a trip that gets an unexpected ending and has catastrophic consequences.Ten years later a small group of friends go for a weekend in an old hunting lodge in Ellioaey. A place completely cut off from the outside world, to reconnect. But one of them isn't going to make it out alive. And Detective Inspector Hulda Hermannsdottir is determined to find the truth in the darkness.Ragnar Jonasson burst onto the American scene with Snowblind and Nightblind, the first two novels in the Ari Thor thriller series, and the praise was overwhelming. With The Darkness, he launched a new series featuring a completely new sleuth, Detective Inspector Hulda Hermannsdottir of the Reykjavik Police department. The Island is the second audiobook in this series.

The Island: A Thriller
The Hulda Series #2

The Darkness
The Hulda Series #1

The Mist
The Hulda Series #3