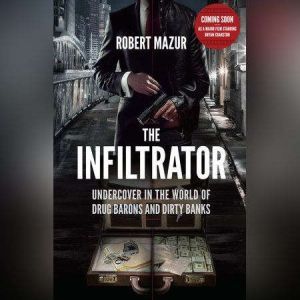 The Infiltrator: My Secret Life Inside the Dirty Banks Behind Pablo Escobar's Medellin Cartel

Federal Agent Robert Mazur spent five years undercover as a money launderer to the international underworld, gaining access to the zenith of a criminal hierarchy safeguarded by a circle of dirty bankers and businessmen who quietly shape power across the globe. These men and women control multibillion-dollar drug-trafficking empires, running their organizations like public companies. Accountants, attorneys, and financial advisors, their roots run deep in their communities, and they are laundering billions of dollars a year, manipulating complex international finance systems to serve drug lords, corrupt politicians, tax cheats, and terrorists. In 1987, Mazur began infiltrating BCCI, bankers behind the Medellín cartel. He meticulously gathered evidence for years until, during a fake wedding, federal agents arrested over 40 high-ranking criminals, who were all found guilty and sent to prison. Never before told, this is the incredible, true story of how he did it.