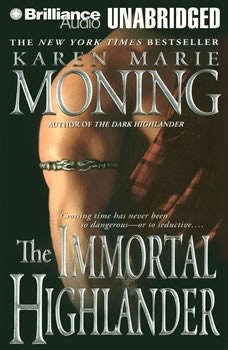 With his long, black hair and dark, mesmerizing eyes, Adam Black is Trouble with a capital T. Immortal, arrogant, and intensely sensual, he is free to roam across time and continents in pursuit of his insatiable desires. That is, until a curse strips him of his immortality and makes him invisible, a cruel fate for so irresistible a man. With his very life at stake, Adam’s only hope for survival is in the hands of the one woman who can actually see him. Enter law student Gabrielle O’Callaghan. For Gabrielle, cursed with the ability to see both worlds, Mortal and Faery, it is the beginning of a long, dangerous seduction. But as Adam’s quest to regain his immortality plunges them into a world of timeless magic, the price of surrender could be their very lives. Unless they can thwart the conspiracy that threatens both Mortal and Faery realms…and give them a shot at a destiny few mortals ever know: glorious, wondrous, endless love…

Jaxon Montgomery is a woman hunted. Trained by the Special Forces, honed by a traumatic childhood, she is a policewoman with an undisputed reputation. She meets her match when she is set up to be murdered by an enemy. Hunted on all sides, she can o...

This has to be the best book I have read in a long time. Ms.Moning is one of the best authors out there. If you love romance novel as much as I do, you should definately give The Highland series a try.

I Could not put it down. The story grabs you from the very start and holds you right to the end. One of her best.

T've read several of Ms.Moning books and by far I think this is the best one. I agree with the other reviewer that if you love romance in the Scottish way and as much as I do, you should definitely give The Highland series a read.