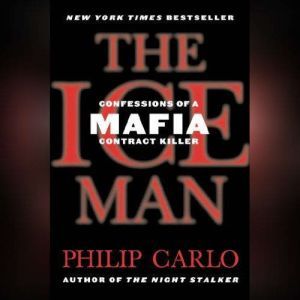 The Ice Man: Confessions of a Mafia Contract Killer

Richard "The Ice Man" Kuklinski led a double life beyond anything ever seen on The Sopranos, becoming one of the most notorious professional assassins in American history while hosting neighborhood barbecues in suburban New Jersey. Now, after 240 hours of face-to-face interviews with Kuklinski and his wife and daughters, author Philip Carlo tells his extraordinary story. Kuklinski was Sammy "The Bull" Gravano's partner in the killing of Paul Castellano at Spark's Steakhouse. John Gotti hired him to kill the neighbor who accidentally ran over his child. For an additional price, he would make victims suffer; he conducted this sadistic business with cold-hearted intensity, never disappointing his customers. By his own estimate, he killed over two hundred men, taking enormous pride in his variety and ferocity of technique. Kuklinski's story, once known, captivated the public and became the subject of three HBO documentaries about which the New York Times raved "Few viewers are ever likely to forget this thoroughly chilling portrait. As for possible movie competition, it would work on the level of The Silence of the Lambs."

This book was riveting. Knowing that it was non-fiction, I found myself looking over my shoulder for a few days. This one was extremely long (16 disks). Frankly there was not enough material for this length. The author spent a lot of time repeating himself. There was more then one time when I actually checked to make sure I hadn't accidentally switched to an earlier disk in my multi-CD changer, because there was so much in depth detail being repeated. All in all, it is a great book. It got a 4 star instead of a 5 because I think the author could have done it in about 12 disks.

This is very fascinating....and very gory. Listen to it if you can.