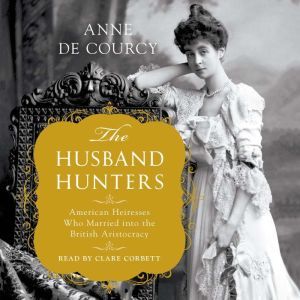 The Husband Hunters: American Heiresses Who Married into the British Aristocracy

"[Narrator Clare Corbett's] lively performance and clear diction help listeners understand the complicated social rules underlying the splendor of the world's richest as they vied for the perfect spouse." — AudioFile Magazine The Husband Hunters is a deliciously told historical audiobook about the young, rich, American heiresses who married impoverished, British gentry at the turn of the twentieth century – The real women who inspired Downton AbbeyTowards the end of the nineteenth century and for the first few years of the twentieth, a strange invasion took place in Britain. The citadel of power, privilege and breeding in which the titled, land-owning governing class had barricaded itself for so long was breached. The incomers were a group of young women who, fifty years earlier, would have been looked on as the alien denizens of another world - the New World, to be precise. From 1874 - the year that Jennie Jerome, the first known 'Dollar Princess', married Randolph Churchill - to 1905, dozens of young American heiresses married into the British peerage, bringing with them all the fabulous wealth, glamour and sophistication of the Gilded Age.Anne de Courcy sets the stories of these young women and their families in the context of their times. Based on extensive first-hand research, drawing on diaries, memoirs and letters, this richly entertaining group biography reveals what they thought of their new lives in England - and what England thought of them.Praise for The Husband Hunters:"Witty and well researched, Anne de Courcy brings to colorful, dramatic life these dollar princesses whose vast fortunes propelled them to glittering trans-Atlantic marriages that captivated international society."— Daisy Goodwin, New York Times bestselling author of American Heiress“Downton Abbey fans will swoon over this trip through the privileged turn-of-the-century world of cash, class, and coronets." — Kirkus