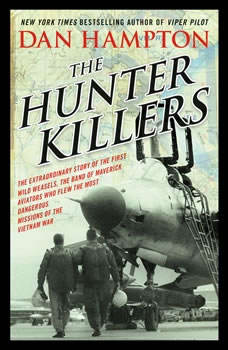 The Hunter Killers: The Extraordinary Story of the First Wild Weasels, the Band of Maverick Aviators Who Flew the Most Dangerous Missions of the Vietnam War

A gripping chronicle of the band of maverick fighter pilots who signed on for the suicidal, dangerous top-secret “Iron Hand” program during the Vietnam War—which used revolutionary tactics to combat Soviet missile technology—from New York Times bestselling author Dan Hampton.On July 24, 1965, Soviet advisors to North Vietnam launched an SA-2 surface-to-air missile (SAM), blowing an American F-4 Phantom out of the sky—the first of several U.S. kills using this fearsome new technology. To counter this new weaponry, stunned Pentagon officials created a classified program—“Iron Hand”—that offered a small group of maverick pilots a chance to counter this deadly threat.Fifty years later, Dan Hampton provides a cockpit view of this highly classified military program that was a radical departure from practiced tactical jet aviation—and carried a fifty-percent casualty rate. Yet despite the odds, a band of courageous, daring, and skilled pilots—warriors who took the name Wild Weasels—risked their lives to save their Air Force brothers.Using first-hand accounts, declassified documents from both sides of the conflict, and featuring unpublished photographs, The Hunter Killers takes readers into the skies, and up close to the bloody duels that left half the Weasels dead or captured. At its center are the men who risked everything to be a part of history. Hampton brings them into focus, exploring their lives and personalities, and the characteristics—a combination of ego, bravery, heroism, and duty—that motivated them. He also looks at their legacy, which continues to influence the military today.