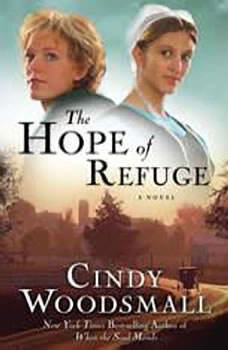 The Hope of Refuge: Book 1 in the Ada's House Amish Romance Series

The first book in the Ada's House series, The Hope of Refuge is a moving story of love, hope, and new beginnings from New York Times bestselling author Cindy Woodsmall.

The widowed mother of a little girl, Cara Moore is struggling against poverty, fear, and a relentless stalker. When her stalker ransacks her home, Cara and her daughter, Lori, flee New York City for an Amish community, eager for a fresh start. But she discovers that long-held secrets about her family history ripple beneath the surface of Dry Lake, Pennsylvania, and it’s no place for an outsider. One Amish man, Ephraim Mast, dares to fulfill the command he believes that he received from God—“Be me to her”—despite how it threatens his way of life. While Ephraim tries to do what he believes is right, will he be shunned and lose everything, including the guarded single mother who simply longs for a better life?

A complete opposite of the hard, untrusting Cara, Ephraim’s sister Deborah also finds her dreams crumbling when the man she has pledged to build a life with begins withdrawing from Deborah and his community, including his mother, Ada Stoltzfus. Can the run-down house that Ada envisions transforming unite them toward a common purpose—or will it push Mahlon away forever?

An Amish widow must rely on her faith and the kindness of her close-knit community as she mends her broken heart in this compelling novel in the Pleasant Valley series.It has been almost a year since the Amish community of Pleasant Valley lost Ezra ...

The Bridge of Peace
An Ada's House Novel

The Harvest of Grace
An Ada's House Novel