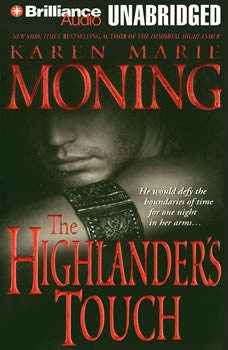 A Warrior of Immortal Powers He was a mighty Scottish warrior who lived in a world bound by ancient laws and timeless magic. But no immortal powers could prepare the laird of Castle Brodie for the lovely accursed lass who stood before him. A terrible trick of fate had sent her 700 years back in time and into his private chamber to tempt him with her beauty - and seduce him with a desire he could never fulfill. For this woman he burned to possess was also the woman he had foresworn to destroy. A Woman Caught in the Mists of Time When Lisa felt the earth move under her feet, the fiercely independent 21st-century woman never dreamed she was falling...into another century. But the powerful, naked warrior who stood glaring down at her was only too real...and too dangerously arousing. Irresistibly handsome he might be, but Lisa had no intention of remaining in this savage land torn by treachery and war. How could she know that her seductive captor had other plans for her...plans that would save her from a tragic fate? Or that this man who had long ago forsaken love would defy time itself to claim her for his own....

This is the first book I have read from this series. i enjoyed the overall story but by the end i fell into a diabetic coma. Lisa and Circenn are great but once they final decide to give in and be with each other the romance turns sugary sweet and sometimes a little nauseating. You'll enjoy this if you like romance with saccherine.