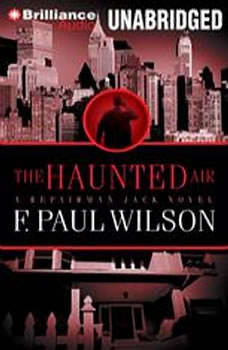 “Call a plumber when the sink is clogged, the cops when you’ve been robbed, but when the you-know-what hits the fan, it’s time to call Repairman Jack.… [The Haunted Air] shakes, rattles and rolls.” —New York Daily NewsRepairman Jack doesn’t believe a house can be haunted. But he’s about to change that tune.…In the borough of Queens, just across the river from Manhattan, two clever practitioners of spiritualist hocus-pocus use high-tech tricks to dupe their marks. Perhaps they’re too good: they’ve lured too many clients from other mediums and are now under attack. Unable to go to the police for fear of exposing their own scams, they hire Repairman Jack to fix their problem.Jack takes the job, figuring he’ll straighten out the situation through one of his favorite pastimes: scamming a scammer. But soon he learns that this fix-it job may involve more than just professional jealousies. A sudden earthquake and a tortured scream mark the awakening of something in Menelaus Manor, something that used to be someone—an entity full of rage that was brought back for a specific purpose. But this entity has an agenda of its own.…“F. Paul Wilson is a hot writer, and his hottest and my favorite creation is Repairman Jack.” —Joe R. Lansdale“Readers know they can count on Wilson to weave the most unruly narrative strands into a tight Gordian plot and he doesn’t disappoint here.… Above all, the novel enhances the enigma of Jack, a hero who commands respect.” —Publishers Weekly