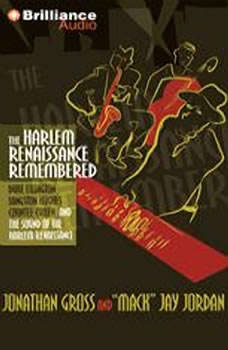 Duke Ellington, Langston Hughes, Countee Cullen and the Sound of the Harlem RenaissanceNew York City, uptown, Harlem. In the 1920s it was the most exciting place in the world. Poets, writers, dancers, and musicians all came together and invented a new American culture - a dazzling and revolutionary African American culture of music and poetry and art. Everyone who was anyone wanted to come to Harlem and hear the music of jazz genius Duke Ellington, the rap-like stylings of Langston Hughes, and the classical lyricism of Countee Cullen. It was a true time of rebirth for African Americans who were striving for recognition and respect. It was The Harlem Renaissance - an explosive celebration of African American life and culture like the world had never seen before. It produced some of the 20th century's greatest and most influential artists; artists like Ellington, Hughes, and Cullen, who are remembered and loved today.Filled with energy and the spirit of freedom and creative expression, the Harlem Renaissance changed America forever. Hear it and experience it yourself in The Harlem Renaissance Remembered.

If you found The Amazing Book is Not on Fire at least mildly interesting, or even if you didn't read it at all, then you will LOVE our audiobook! Not only do you get us sensually narrating the whole thing in your ears, but there ...

The bestselling memoir by Nobel Peace Prize winner Malala Yousafzai.I Am Malala. This is my story. Malala Yousafzai was only ten years old when the Taliban took control of her region. They said music was a crime. They said women weren't allowed to...

“Highly recommended for high school and ambitious middle school readers.” —School Library Journal"A valuable addition to STEM-themed collections." —VOYAAn in-depth look into the extraordinary life of the world’s most i...

In this captivating and lavishly illustrated young adult edition of her award-winning #1 New York Times bestseller, Laura Hillenbrand tells the story of a former Olympian's courage, cunning, and fortitude following his plane crash in enemy terr...

A New York Times bestseller and National Book Award winner Jacqueline Woodson, the acclaimed author of Another Brooklyn, tells the moving story of her childhood in mesmerizing verse.    Raised in South C...