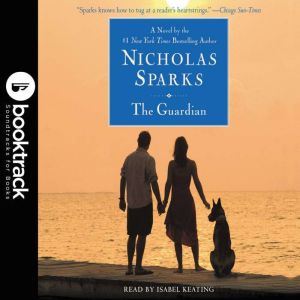 The Guardian: Booktrack Edition adds an immersive musical soundtrack to your audiobook listening experience!*Julie Barenson's young husband left her two unexpected gifts before he died - a Great Dane puppy named Singer and the promise that he would always be watching over her. Now four years have passed. Still living in the small town of Swansboro, North Carolina, twenty-nine-year-old Julie is emotionally ready to make a commitment to someone again. But who? Should it be Richard Franklin, the handsome, sophisticated engineer who treats her like a queen? Or Mike Harris, the down-to-earth nice guy who was her husband's best friend? Choosing one of them should bring her more happiness than she's had in years. Instead, Julie is soon fighting for her life in a nightmare spawned by a chilling deception and jealousy so poisonous that it has become a murderous desire...*Booktrack is an immersive format that pairs traditional audiobook narration to complementary music. The tempo and rhythm of the score are in perfect harmony with the action and characters throughout the audiobook. Gently playing in the background, the music never overpowers or distracts from the narration so that listeners can enjoy every minute. When you purchase this Booktrack edition, you receive the exact narration as the traditional audiobook available, with the addition of music throughout.