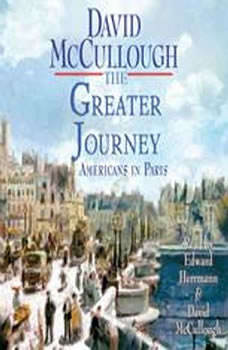 The Greater Journey: Americans in Paris

Now in paperback, the New York Times bestseller from two-time Pulitzer Prize-winning author David McCullough—the inspiring, enthralling story of the American painters, writers, sculptors, and doctors who journeyed to Paris between 1830 and 1900.A Special Audio Presentation of Unabridged SelectionsPersonally Chosen by David McCulloughThe Greater Journey is the enthralling, inspiring—and until now, untold—story of the adventurous American artists, writers, doctors, politicians, architects, and others of high aspiration who set off for Paris in the years between 1830 and 1900, ambitious to excel in their work. Most had never left home, never experienced a different culture. None had any guarantee of success. That they achieved so much for themselves and their country profoundly altered American history. As David McCullough writes, “Not all pioneers went west.”Writer Emma Willard, who founded the first women’s college in America, was one of the intrepid bunch.Another was Charles Sumner, who enrolled at the Sorbonne where he saw black students with the same ambition he had, and when he returned home, he would become the most powerful, unyielding voice for abolition in the U.S. Senate. James Fenimore Cooper and Samuel F. B. Morse worked unrelentingly every day in Paris, Cooper writing and Morse painting what would be his masterpiece. From something he saw in France, Morse would also bring home his momentous idea for the telegraph. Writers Ralph Waldo Emerson, Nathaniel Hawthorne, Mark Twain, and Henry James were all “discovering” Paris, marveling at the treasures in the Louvre, or out with the Sunday throngs strolling the city’s boulevards and gardens. “At last I have come into a dreamland,” wrote Harriet Beecher Stowe, seeking escape from the notoriety Uncle Tom’s Cabin had brought her. The genius of sculptor Augustus Saint-Gaudens and painter George Healy would flourish in Paris, inspired by the examples of brillant French masters, and by Paris itself.For this special audio presentation, McCullough has chosen a selection of portraits, excerpted in their entirety, that bring us into the lives of these remarkable men and women. A sweeping, fascinating story told with power and intimacy, The Greater Journey is itself a masterpiece.

FROM THE #1 NEW YORK TIMES BESTSELLING AUTHOR OF JOHN ADAMS At the end of the last century, Johnstown, Pennsylvania was a booming coal-and-steel town filled with hardworking families striving for a piece of the nation's burgeoning industrial prospe...

Pulitzer Prize-winning historian David McCullough rediscovers an important and dramatic chapter in the American story—the settling of the Northwest Territory by dauntless pioneers who overcame incredible hardships to build a community based on...

Andrew Jackson and the Miracle of New Orleans
by Brian Kilmeade

Another history pageturner from the authors of the #1 bestsellers George Washington's Secret Six and Thomas Jefferson and the Tripoli Pirates.The War of 1812 saw America threatened on every side. Encouraged by the British, Indian trib...

Dodge City, Kansas, is a place of legend. The town that started as a small military site exploded with the coming of the railroad, cattle drives, eager miners, settlers, and various entrepreneurs passing through to populate the expanding West. Befor...

Thomas Jefferson and the Tripoli Pirates
by Brian Kilmeade

“Another blockbuster! Thomas Jefferson and the Tripoli Pirates reads like an edge-of-your-seat, page-turning thriller. You will love this book and also wonder why so few people know this story. No one captures the danger, intrigue, and drama o...

From Alexander von Humboldt to Charles and Anne Lindbergh, these are stories of people of great vision and daring whose achievements continue to inspire us today, brilliantly told by master historian David McCullough, who narrates his beloved classi...

i am currently reading the hardcover book.its a wonderful book and the illustrations make it worth while to buy the book.i cant wait to get the audio book as well.McCullough is a national treasure. I hope he lives many more years and continues his writing about our countries history.