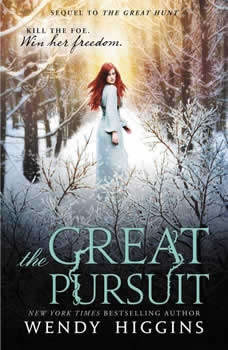 In The Great Pursuit, the dramatic sequel to the New York Times bestselling The Great Hunt, Wendy Higgins delivers another thrilling fantasy filled with dangerous enemies, political intrigue, searing romance, and a princess who is willing to do everything to protect her kingdom.  One hunt has ended, but the pursuit for love and justice continues.The kingdom of Lochlanach has traded the great beast that once terrorized the realm of Eurona for something far more dangerous: the ire of powerful Lashed woman Rosaria Rocato. Rosaria demands that Eurona overturn the laws prohibiting magic, or an innocent will be killed each day.Despite the king’s resistance, Princess Aerity believes they must make peace with the Lashed, and though she’s accepted a betrothal to the man who took down the beast, she cannot help thinking about Paxton, the Lashed man who stole her heart and disappeared. Aerity soon discovers that Paxton has joined Rosaria’s army in the war against her family. Though her feelings for him are still strong, her duty to her kingdom and her family is stronger—especially when her parents are kidnapped and she has to step up to the throne and once again put aside what’s best for her in order to do what’s best for her people. Paxton and Princess Aerity must fight to see what is more powerful: their love or the impending war between the magical Lashed and the non-magic humans.