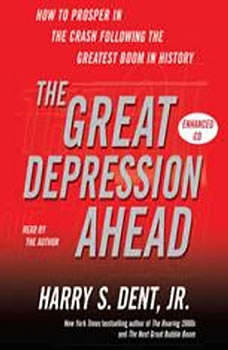 The Great Depression Ahead: How to Prosper in the Crash That Follows the Greatest Boom in History

The New York Times bestselling author of The Roaring 2000s guides listeners through the biggest economic crisis since the Great Depression The first and last economic depression that you will experience in your lifetime is just ahead. The years 2009 and 2010 will be the initial end of prosperity in almost every market, ushering in a downturn like most of us have not experienced before. Renowned economic forecaster Harry S. Dent, Jr. has developed analytical techniques that allow him to predict the impact of economic trends, including the following: • The economy appears to recover from the subprime crisis and minor recession by mid-to-late 2009 "the calm before the real storm." • Stock prices start to crash again between mid-to-late 2009 into late 2010, and likely finally bottom around mid 2012-between Dow 3,800 and 4,500. • The economy enters a deeper depression between mid 2010 and early 2011, likely extending off and on into late 2012 or mid 2013. • Asian markets may bottom by late 2010, along with health care, and be the first great buy opportunities in stocks. • The next broad-based global bull market from 2020-2023 into 2035-2036. Conventional investment wisdom will no longer apply, and investors must drastically reevaluate their policies in order to survive. Dent offers long and short-term recommendations that will allow families, businesses, investors, and individuals to manage their assets correctly and come out on top rather than get caught in a downward spiral.

Investing For Dummies
by MBA Tyson

Stock Trading for Beginners: The Comp...
by Victor Adams

The Advanced Forex and Options Tradi...
by Neil Sharp