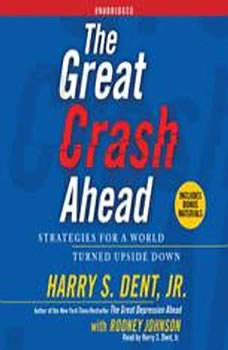 The Great Crash Ahead: Strategies for a World Turned Upside Down

From the bestselling author of The Roaring 2000s and The Great Depression Ahead comes a work that looks forward, showing listeners how to weather the storm in this new economy that is going to get much worse in the years ahead. In his most recent New York Times bestselling work, The Great Depression Ahead, Harry S. Dent predicted the debt crisis that would ensue in the wake of the government’s failed stimulus plan. In addition to offering prescriptions for the current crisis, in The Great Deflation Ahead Dent scrutinizes some of the most dearly held assumptions of economic theory and practice and offers prescriptions for the current crisis. With incisive critical analysis and historical examples, Dent lays bare how such constructs—for instance, the belief in a rational market or of the rational consumer—led to the formation of the great bubble that burst so spectacularly in the crash of 2008. Dent’s investment advice sees no place to hide in what he calls this wintry economic season, but it’s not all doom and gloom; the only way out is preserving your capital and creating cash flow—avoiding the sort of high risk, high profit investment schemes that sunk the world economy—so that you can profit from “the greatest sale on financial assets of a lifetime.” The Great Deflation Ahead is a level headed, thoroughly reasoned message to show listeners how they can survive during this challenging period so that they can thrive when the economy slowly returns to normal.

Stock Trading for Beginners: The Comp...
by Victor Adams

The Advanced Forex and Options Tradi...
by Neil Sharp

Investing For Dummies
by MBA Tyson