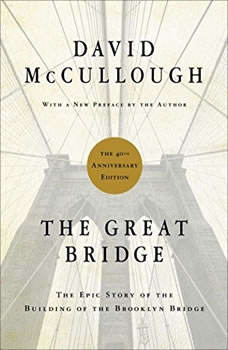 The Great Bridge: The Epic Story of the Building of the Brooklyn Bridge

Published on the fortieth anniversary of its initial publication, this edition of the classic book contains a new Preface by David McCullough, “one of our most gifted living writers” (The Washington Post).Built to join the rapidly expanding cities of New York and Brooklyn, the Brooklyn Bridge was thought by many at the start to be an impossibility destined to fail if not from insurmountable technical problems then from political corruption. (It was the heyday of Boss Tweed in New York.)       But the Brooklyn Bridge was at once the greatest engineering triumph of the age, a surpassing work of art, a proud American icon, and a story like no other in our history.  Courage, chicanery, unprecedented ingenuity and plain blundering, heroes, rascals, all the best and worst in human nature played a part. At the center of the drama were the stricken chief engineer, Washington Roebling and his remarkable wife, Emily Warren Roebling, neither of whom ever gave up in the face of one heartbreaking setback after another.       The Great Bridge is a sweeping narrative of a stupendous American achievement that rose up out of its era like a cathedral, a symbol of affirmation then and still in our time.