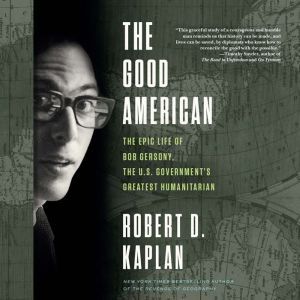 The sweeping yet intimate story of the most influential humanitarian you've never heard of--Bob Gersony, who's spent four decades in crisis zones around the world--from the New York Times bestselling author of The Revenge of Geography.

The Good American is a story about courage, intense loneliness, and the State Department's golden age during the late Cold War and post-Cold War. It is also a celebration of ground level reporting and getting a worm's eye view of crisis zones. Robert Gersony, a high-school dropout later awarded a bronze star in Vietnam, spent over four decades on the ground in virtually every war and natural disaster zone in the world. Interviewing hundreds of refugees and displaced persons in each place to assess humanitarian crises, Gersony's research and thorough reports had an immense, underappreciated impact on US foreign policy across the globe. In every case, his recommendations made it smarter and more humane, often dramatically so.

In his career as a journalist, Robert D. Kaplan often crossed paths with Gersony while covering the "hot" moments of the Cold War and its aftermath. Even as a biography, this is Kaplan's most personal book to date, and through Gersony's story, he makes a poignant case for how American diplomacy should be conducted--with a clear eye toward facts on the ground--at a time when diplomacy is too often being left behind.