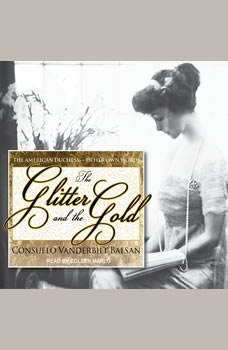 The Glitter and the Gold: The American Duchess---In Her Own Words

Consuelo Vanderbilt was young, beautiful and the heir to a vast family fortune. She was also deeply in love with an American suitor when her mother chose instead for her to fulfill her social ambitions and marry an English Duke. Leaving her life in America, she came to England as the Duchess of Marlborough in 1895 and took up residence in her new home—Blenheim Palace.The ninth Duchess gives unique first-hand insight into life at the very pinnacle of English society in the Edwardian era. An unsnobbish, but often amused observer of the intricate hierarchy both upstairs and downstairs at Blenheim Palace, she is also a revealing witness to the glittering balls, huge weekend parties and major state occasions she attended or hosted. Here are her encounters with every important figure of the day—from Queen Victoria, Edward VII and Queen Alexandra to Tsar Nicholas, Prince Metternich and the young Winston Churchill.This intimate, richly enjoyable memoir is a wonderfully revealing portrait of a golden age.