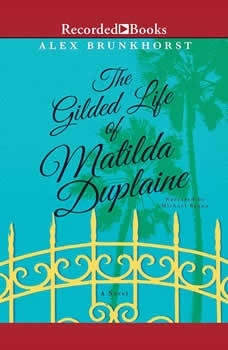 The Gilded Life of Matilda Duplaine

The story begins with a dinner party invitation. When young journalist Thomas Cleary is sent to dig up quotes for the obituary of a legendary film producer, the man's eccentric daughter offers him entrEe into the exclusive upper echelons of Hollywood society. A small-town boy with working-class roots, Thomas is a stranger in this opulent world of private jets and sprawling mansions. Then he meets Matilda Duplaine. Matilda is a beautiful and mysterious young woman who has never left the lush Bel-Air estate where she was raised. Thomas is immediately entranced by the enigmatic girl, and the two begin a secret love affair. But what starts as an enchanted romance soon unravels a web of secrets and lies that could destroy their lives-and the lives of everyone around them-forever. A modern-day Gatsby tale filled with unforgettable characters and charm, The Gilded Life of Matilda Duplaine is a sparkling love letter to Los Angeles and a captivating journey beyond the golden gates of its most glamorous estates. Timeless, romantic and utterly absorbing, it is a mesmerizing tale of privilege, identity and the difficult choices we make in the pursuit of power.