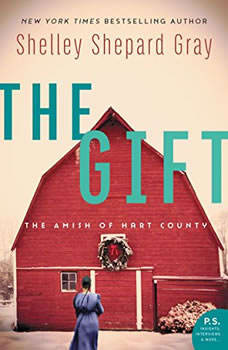 The Gift: The Amish of Hart County

The Schwartz family is happy to be spending Christmas on their new farm in Hart County. But when Susanna Schwartz hears gunshots that cause her buggy to overturn, and then her little sister falls through a wooden bridge into an icy creek, it becomes clear from these dangerous accidents that someone wants the family gone. Neil Vance has been heartbroken ever since his parents lost their family farm. He knows its not the Schwartz familys fault, but he cant help but be resentful until he meets Susanna. She is kindhearted and bold, and Neil cant stop thinking about her pretty green eyes. While Neil believes the accidents are just chance, Susannas father is convinced that the Vance family is responsible. Yet Susanna cant imagine Neil would do anything to harm her. Shes fallen in love with him and knows he is a good man. But her family is ready to pack up and move, and time is running out to uncover the truth before someone gets hurt or worse.

Ross Gardiner has had his fill of difficult relationships. Returning to Last Chance after a rough divorce, the town's handsome new fire chief just wants safety and stability-a tall order given his dangerous job and the way he has the attention of a...

The Promise of Rayne
by Nicole Deese

Rayne Shelby has spent her entire life trying to earn the approval of her high-powered family, with the hope of one day managing her late grandfather’s prestigious Idaho lodge. But when she makes a mistake that puts her future in jeopardy, she...

REAL TEXAS COWBOYS DON'T KISS & TELL Josie Dawson is new in town, but it doesn't take a local to know that Deke Sullivan is trouble--in a smokin' hot package. He's sweet, sexy, and has charmed just about every woman in Dry Creek, Texas. Well, Josie...