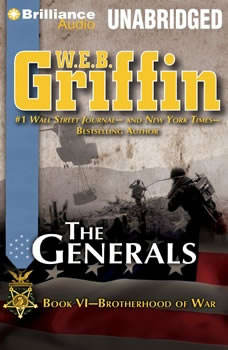 The Generals: Book Six of the Brotherhood of War Series

They were the leaders, the men who made the decisions that changed the outcome of battles... and the fate of continents. From the awesome landing at Normandy to the torturous campaigns of the South Pacific, from the frozen hills of Korea to the devastated wastes of Dien Bien Phu, they had earned their stars. Now they led America’s finest against her most relentless enemy deep in the jungles of Southeast Asia. It was a new kind of war, but the Generals led a new kind of army, ready for battle — and glory... “A major work... magnificent... powerful. If books about warriors and the women who love them were given medals for authenticity, insight and honesty, THE BROTHERHOOD OF WAR would be covered with them.” — WILLIAM BRADFORD HUIE

The Generals: Book Six of the Broth...
Brotherhood of War Series #6