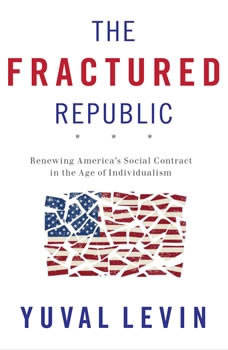 The Fractured Republic: Renewing America's Social Contract in the Age of Individualism

Americans today are frustrated and anxious. Our economy is sluggish and leaves workers insecure. Income inequality, cultural divisions, and political polarization increasingly pull us apart. Our governing institutions often seem paralyzed. And our politics has failed to rise to these challenges.No wonder, then, that Americans - and the politicians who represent them - are overwhelmingly nostalgic for a better time. The Left looks back to the middle of the twentieth century, when unions were strong, large public programs promised to solve pressing social problems, and the movements for racial integration and sexual equality were advancing. The Right looks back to the Reagan Era, when deregulation and lower taxes spurred the economy, cultural traditionalism seemed resurgent, and America was confident and optimistic. Each side thinks returning to its golden age could solve America's problems.In The Fractured Republic, Yuval Levin argues that this politics of nostalgia is failing twenty-first-century Americans. Both parties are blind to how America has changed over the past half century-as the large, consolidated institutions that once dominated our economy, politics, and culture have fragmented and become smaller, more diverse, and personalized. Individualism, dynamism, and liberalization have come at the cost of dwindling solidarity, cohesion, and social order. This has left us with more choices in every realm of life but less security, stability, and national unity.Both our strengths and our weaknesses are therefore consequences of these changes. And the dysfunctions of our fragmented national life will need to be answered by the strengths of our decentralized, diverse, dynamic nation.Levin argues that this calls for a modernizing politics that avoids both radical individualism and a centralizing statism and instead revives the middle layers of society - families and communities, schools and churches, charities and associations, local governments and markets. Through them, we can achieve not a single solution to the problems of our age, but multiple and tailored answers fitted to the daunting range of challenges we face and suited to enable an American revival.