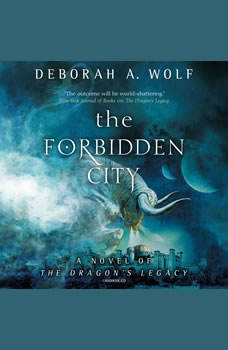 Sulema Ja'Akari is an elite warrior, one of the desert people known as the Zeeranim. She is also the daughter of the Dragon King of Atualon, whose magic is the only thing that prevents the earth dragon from waking. Should the dragon end her sleep, their world will be destroyed.The Dragon King is dying. As heir to his throne, Sulema must be trained to take his place, yet the more she learns, the less she trusts the sinister agendas that surround her. Knowing that her life hangs in the balance, Sulema seeks to return to the Zeera.Salvation may lie with her mother, Hafsa Azeina, who walks the dark and deadly pathways of the Dreaming Lands. To save her daughter, the dreamshifter will be forced to strike a pact with her greatest enemy, a huntress who would rather kill her than assist her.Upheaval stretches far beyond Atualon-to the forbidden city of Khanbul where the emperor rules with an iron hand. An elite cadre of rebel conspirators chafes beneath his rule and plots to overthrow him.Among them is Jian de Allyr, the half-dae prince born of a human mother and a twilight lord. If they are to challenge the emperor in his stronghold, however, Jian and his co-conspirators must secretly raise an army.