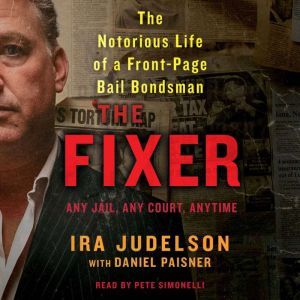 The Fixer: The Notorious Life of a Front-Page Bail Bondsman

You never want to have to call Ira Judelson, but if you have to call someone you better hope it's him. He doesn't care if you did it or not. He only cares if you run and try to screw him over. But if he trusts you, maybe he can do more than just keep you out of jail. Maybe he is the only thing standing between you getting sucked up in the injustice system and forgotten about, or worse being locked up in jail with no protection and a pretty face. He knows which judges might let you slide and which ones have zero tolerance; he has a direct line to white shoe lawyers who do pro bono for the right case; he knows the cops and DAs who believe in second chances; and he's helped enough pimps, gangbangers, and Family that if he needs information or protection, it's just a phone call away. Ira Judelson is New York's leading bail bondsman, with a client list that reads like a who's who list culled from the tabloids and the city's court dockets: former New York Giants Plaxico Burress and Lawrence Taylor; rappers Ol' Dirty Bastard, Ja Rule, Lil' Wayne, and DMX; comedian Katt Williams; notorious Manhattan madam Kristin Davis; and disgraced IMF chief Dominique Strauss-Kahn. At once a hustler and a humanitarian, Judelson is our canny, indignant, hilarious guide through the underbelly of New York City law.