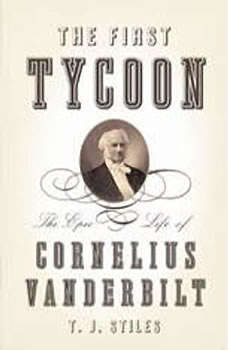 The First Tycoon: The Epic Life of Cornelius Vanderbilt

A gripping, groundbreaking biography of the combative man whose genius and force of will created modern capitalism.

Founder of a dynasty, builder of the original Grand Central, creator of an impossibly vast fortune, Cornelius “Commodore” Vanderbilt is an American icon. Humbly born on Staten Island during George Washington’s presidency, he rose from boatman to builder of the nation’s largest fleet of steamships to lord of a railroad empire. Lincoln consulted him on steamship strategy during the Civil War; Jay Gould was first his uneasy ally and then sworn enemy; and Victoria Woodhull, the first woman to run for president of the United States, was his spiritual counselor. We see Vanderbilt help to launch the transportation revolution, propel the Gold Rush, reshape Manhattan, and invent the modern corporation—in fact, as T. J. Stiles elegantly argues, Vanderbilt did more than perhaps any other individual to create the economic world we live in today.

In The First Tycoon, Stiles offers the first complete, authoritative biography of this titan, and the first comprehensive account of the Commodore’s personal life. It is a sweeping, fast-moving epic, and a complex portrait of the great man. Vanderbilt, Stiles shows, embraced the philosophy of the Jacksonian Democrats and withstood attacks by his conservative enemies for being too competitive. He was a visionary who pioneered business models. He was an unschooled fistfighter who came to command the respect of New York’s social elite. And he was a father who struggled with a gambling-addicted son, a husband who was loving yet abusive, and, finally, an old man who was obsessed with contacting the dead.

The First Tycoon is the exhilarating story of a man and a nation maturing together: the powerful account of a man whose life was as epic and complex as American history itself.