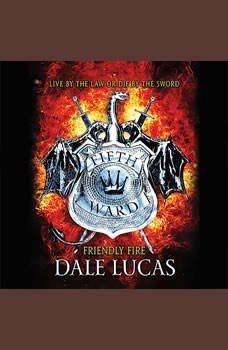 The second book in a series featuring two misfit partners working a case in a crime-ridden city filled with orcs, humans, elves, dwarves, and mages - The Lord of the Rings meets Lethal Weapon.In the most dangerous district of the city, the Fifth Ward, Rem and Torval have been perfecting their good cop, bad cop routine while protecting residents from drug-dealing orcs, mind-controlling elves, uncooperative mages, and humans being typical humans.But when a perplexing case of arson leads to a series of gruesome, unsolvable murders, the two partners must challenge their own assumptions and loyalties if they are to preserve their partnership, wrest justice from the chaos, and keep their ward from tearing itself apart. "A brilliant premise, wonderfully told. A city that breathes, and heroes you can't help but root for." -- Nicholas Eames, author of Kings of the Wyld"A glorious tour through fantasy's seamier side. A wilder ride than Middle Earth, and you'll love every minute of it!" -- Jon Hollins, author of the Dragon Lords seriesFor more from Dale Lucas, check out The Fifth Ward: First Watch.

The Sword and Shield
by Emma Khoury