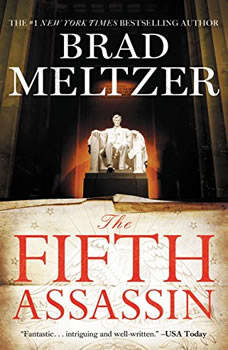 The Fifth Assassin: Booktrack Edition adds an immersive musical soundtrack to your audiobook listening experience! * From John Wilkes Booth to Lee Harvey Oswald, there have been more than two dozen assassination attempts on the President of the United States.Four have been successful.But now, Beecher White--the hero of the #1 New York Times bestseller The Inner Circle--discovers a killer in Washington, D.C., who's meticulously re-creating the crimes of these four men. Historians have branded them as four lone wolves. But what if they were wrong?Beecher is about to discover the truth: that during the course of a hundred years, all four assassins were secretly working together. What was their purpose? For whom do they really work? And why are they planning to kill the current President? Beecher's about to find out. And most terrifyingly, he's about to come face-to-face with the fifth assassin. *Booktrack is an immersive format that pairs traditional audiobook narration to complementary music. The tempo and rhythm of the score are in perfect harmony with the action and characters throughout the audiobook. Gently playing in the background, the music never overpowers or distracts from the narration, so listeners can enjoy every minute. When you purchase this Booktrack edition, you receive the exact narration as the traditional audiobook available, with the addition of music throughout.