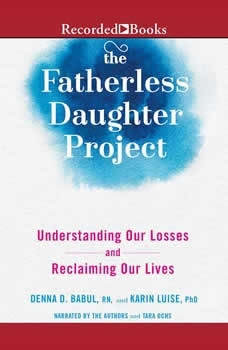 The Fatherless Daughter Project: Understanding Our Losses and Reclaiming Our Lives

When Motherless Daughters was published 20 years ago, it unleashed a tsunami of healing awareness. When Denna Babul and Karin Smithson couldn't find the equivalent book for fatherlessness, The Fatherless Daughter Project was born. The book will set fatherless women on the path to growth and fulfillment by helping them to understand how their loss has impacted their lives. A father is supposed to provide a sense of security and stability. Losing a father comes with particular costs that vary depending on the way he left and how old a girl was when she lost him. Drawing on interviews with over 5000 women who became fatherless due to death, divorce, neglect, and outright abandonment, the authors have found that fatherless daughters tend to push their emotions underground. These issues in turn become distinct patterns in their relationships as adult women and they often can't figure out why. Delivered with compassion and expertise, this book allows readers support and understanding they never had when they first needed it, and it encourages the conversation to continue. Narrators: Tara Ochs, Karin Luise, Denna Babul

The Five Invitations
by Frank Ostaseski

Death is not waiting for us at the end of a long road. Death is always with us, in the marrow of every passing moment. She is the secret teacher hiding in plain sight, helping us to discover what matters most.Life and death are a package deal. They ...

The Letter
by Marie Tillman

In 2003, Pat Tillman, serving in the US Army, hastily wrote a "just in case" letter to his wife, Marie. When he returned on leave before his departure to Afghanistan, he placed the letter on top of their bedroom dresser. For months it sat there, se...

20-Month Legend, The
by Steve Tate

As if juggling a life with half-a-dozen kids, including triplets, isnt enough, Steve Tate receives the life-altering news that one of his triplets, Hayes, has been diagnosed with brain cancer. The once-star collegiate football player finds himself f...

A guide to happiness and love by a renowned inspirational counselor Dr. Miles O'Brien Riley often deals with issues revolving around the grief process and the adjustments that take place before that process is complete. Told with many examples taken...

Meditations on Living, Dying and Loss
by Graham Coleman

The Tibetan Book of the Dead is the most significant of all Tibetan Buddhist writings in the West and one of the most inspirational and compelling texts in world literature. In Meditations on Living, Dying and Loss, Graham Coleman, the editor of Vik...

Fighting the Lightning
by Brad Meltzer

What My Mother Gave Me Before She Died
by Brad Meltzer

Dedicated to the memory of his mother, here's Brad's story of love, compassion, and most importantly his mother, Terri Meltzer.

In twelve months between 2007 and 2008, Christopher Buckley coped with the passing of his father, William F. Buckley, the father of the modern conservative movement, and his mother, Patricia Taylor Buckley, one of New York's most glamorous and colo...

Inspired by the website that the New York Times hailed as "redefining mourning," this book is a fresh and irreverent examination into navigating grief and resilience in the age of social media, offering comfort and community for coping with the mes...