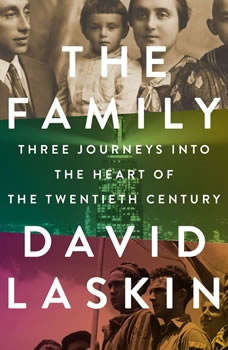 The Family: Three Journeys into the Heart of the Twentieth Century

With cinematic power and beauty, bestselling author David Laskin brings to life the upheavals of the twentieth century through the story of one family, three continents, two world wars, and the rise and fall of nations.

A century and a half ago, a Torah scribe and his wife raised six children in a yeshivatown at the western fringe of the Russian empire. Bound by their customs and ancient faith, the pious couple expected their sons and daughter to carry family traditions into future generations. But the social and political crises of our time decreed otherwise.

The torrent of history took the scribe’s family down three very different roads. One branch immigrated to America and founded the fabulously successful Maidenform Bra Company; another went to Palestine as pioneers and participated in the contentious birth of the state of Israel; the third branch remained in Europe and suffered the onslaught of the Nazi occupation.

In tracing the roots of this family—his own family—Laskin captures the epic sweep of the twentieth century. A modern-day scribe, Laskin honors the traditions, the lives, and the choices of his ancestors: revolutionaries and entrepreneurs, scholars and farmers, tycoons and truck drivers. The Family is a deeply personal, dramatic, and emotional account of people caught in a cataclysmic time in world history.

“An extraordinary work of reportage on the epic political story of our time” (Newsweek)—from Bob Woodward and Carl Bernstein, Pulitzer Prize-winning coauthors of All the President’s Men.The Final Days is the #1 New York Times...

Master storyteller Ben Macintyre’s most ambitious work to date brings to life the twentieth century’s greatest spy story.Kim Philby was the greatest spy in history, a brilliant and charming man who rose to head Britain’s count...

From Bill Minutaglio and Steven L. Davis, authors of the PEN Center USA award-winning Dallas 1963, comes a madcap narrative about Timothy Leary's daring prison escape and run from the law.On the moonlit evening of September 12, 1970, an ex-Harvard ...