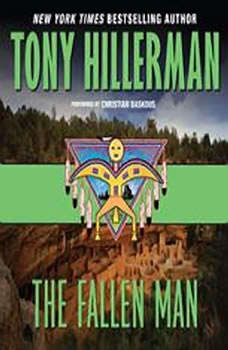 Hundreds of thousands of devoteeswill cheer the return of Joe Leaphorn and Jim Chee in Tony Hillerman's mostintricate and atmospheric novel yet. The Navajo policemen, whose exploitsare now published in sixteen languages, are brought together by the deathof a man on Ship Rock, almost 1700 feet above the desert floor.The fallen man had sprawled on the ledge under the peak of Ship Rock mountainfor eleven years-visited only by the ravens who had picked his bones bareand scattered his rock-climbing gear.Through the memory of those who had known him, emerges an understandingof the fallen man, who had been given everything and found it was notenough.The Fallen Man is replete with Hillerman trademarks-ingeniously intricateplotting, splendid evocations of the Southwest's harsh beauty, insightsinto a venerable culture, and subtly poignant characterizations.Tony Hillerman's many bestselling novels include Finding Moon, Sacred Clowns,and Coyote Waits. He lives with his wife, Marie, in Albuquerque, New Mexico.Gil Silverbird is an American Navajo Indian who sings in several languagesand performs extensively in the theatre and on television. He can be heardon Tony Hillerman's The Ghostway and Sacred Clowns.