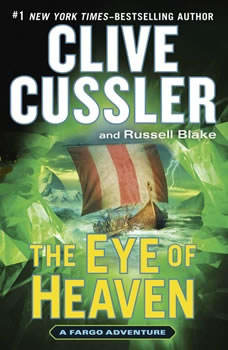 The Eye of Heaven

Treasure hunting husband-and-wife team Sam and Remi Fargo must protect a discovery that redefines Totlec history in this high-stakes adventure from the #1 New York Times–bestselling author.

Baffin Island: Sami and Remi Fargo are on a climate-control expedition in the Arctic, when to their astonishment they discover a Viking ship in the ice, perfectly preserved—and filled with pre–Columbian artifacts from Mexico.

How can that be? As they plunge into their research, tantalizing clues about a link between the Vikings and the legendary Toltec feathered serpent god Quetzalcoatl—and a fabled object known as the Eye of Heaven—begin to emerge. But so do many dangerous people. Soon the Fargos find themselves on the run through jungles, temples, and secret tombs, caught between treasure hunters, crime cartels, and those with a far more personal motivation for stopping them. At the end of the road will be the solution to a thousand-year-old mystery—or death.

The Eye of Heaven
A Sam and Remi Fargo Adventure #6

The Solomon Curse
A Sam and Remi Fargo Adventure #7